For Every Action, There Is A Reaction 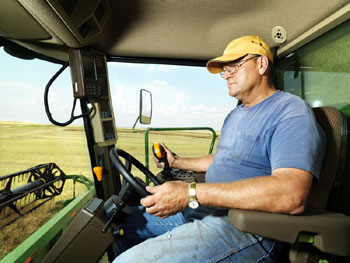 A price for progress

The modern day corn hybrids are very different than when I was a young farmer. I remember about the second or third year I farmed, the corn blew down. We still picked corn as ear corn and we had a pull type cornpicker. This became a huge problem because in order to harvest this corn, we had to harvest going one direction. I started harvesting on one side of the field picking corn one way, then driving back to the other end of the field empty and then harvesting my way back again. This became real discouraging, because right across the fence was a neighbor with a mounted picker harvesting both ways. About noon, my patience was exhausted and I went to town and traded cornpickers and that was my first mounted cornpicker. This wasn't the perfect solution either, because it was a lot noisier and dirtier, not to mention the increased risk of fire when some corn silks would get around the manifold. But was much happier because I was harvesting corn both ways. I think about those good old days now when I get in my combine with an air conditioned cab and no dust to inhale. What progress to the easy life.

I bring these memories up for a reason. Usually when progress is made we have to give up something to get there. Just like when I traded cornpickers, it ended up being a little dirtier and noisier, but I still thought I was making progress. It has been many years since I have had a corn crop on the ground like that one. What's happened? Why does corn stand better today than thirty years ago? The corn breeders have been at work, doing their job trying to manipulate the corn plant to modern day harvesting methods. I must say they have done a good job. 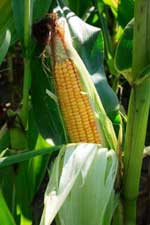 Let's look at a corn plant and see if we can identify some of the characteristics they have changed to accomplish this. First of all, we have to ask ourselves what makes a stalk stiff so it stands well? The logical answer to that question would be lignin or outer part of the stalk. The center of the stalk is soft. This is the vascular system of the plant. That part of the plant is not stiff so it wouldn't add much to the strength of the stalk. So a plant breeder would be attracted to a variety that had a very hard and thick outer covering on the stalk. If we were feeding cattle and using corn silage we would say they increased the NDF (non digestible fiber) and decreased the ADF (acid detergent fiber). Now just think about the last statement.

What has just been said is the feed value of the stalk has been lowered. What effect does this have? The obvious one, of course, is if your making corn silage, the stalk does not have the feeding value that it did thirty years ago. The other thing that develops with this style of corn stalk is it's ability to break down into organic matter. If the stalk isn't as digestible to an animal it has the same effect when it comes to microbes. There is more to this story also. The corn breeders have also been breeding corn for higher yields. I have been' told that corn yields should increase about 2% per year just from genetics. One of the many ways this is being accomplished is transferring the starch and sugars from the inside of the stalk to the grain. This raises the weight of the grain by putting more starch and sugars in the grain. The tradeoff here is it also lowers the protein of the grain. In our feed laboratory we have a book called, "Morrisons Feeds & Feeding". This book has the averages of what most feedstuffs should test. The problem is this book's copywrite date is 1956. This book tells me that on the average the protein level of shelled corn should be 9%. The shelled corn tested in our laboratory on the average may reach 7%. That's not saying we do not see 9% corn, but I am talking averages. We tested nutrients on a test plot in 1996 and the protein levels ranged from 4.7% to 10.5%.

What about the soil? This is the real loser in this scenario. We have taken more nutrients out the residue therefore; we have less to recycle back into the soil. Now we have less nutrients to recycle and we have most of the nutrients bound in a non digestible form. We have less food for the bacteria to unlock it. It looks to me like we have a hopeless situation. It is hopeless if it left right where we are now. We will have to change some of our management to overcome progress.

The solution to this problem lies in residue sprays. We at IAL have encouraged spraying residue for many years. It has never been more important to do so than now. The first thing we need to do is narrow the carbon to nitrogen level. The ratio of these elements should be between 12 to 20: 1. A180 bushel corn crop may end up having a ratio of 100: 1. That means the number one element we need to add would be nitrogen. The narrow ratio is where the microbes work the best. What we are doing is making an environment for the microbes that will make there numbers explode. The next element would be sulfates to stabilize the nitrogen so we don't lose it. Sulfates also encourage microbial growth. Carbon or sugar is a great food for microbes. At IAL we usually put together a mixture as follows:

It is important that the stalks are incorporated into the soil after spraying. Z-Hume is the actual microbe in a liquid humate solution. Z-Hume has all three main groupings of bacteria. There are Aerobic, Anaerobic and Flaculative.

This mixture gives you a tough group of microbes that are resistant to sunlight. Sunlight is the worst enemy for residue sprays. We want the residue lightly incorporated into the soil. This mixture should give you good breakdown of the lignin in your cornstalk.

If you are a organic producer, you can not use this mixture. If that is the case, liquid fish, sugar and Crescendo would be my choice. Crescendo has residue digesters in it. This only has aerobic bacteria, so it is important not to incorporate to deep, 1-2 inches of incorporation into the soil and this should work great. The mixture to use would be:

There are corn hybrids that do leave the nutrients in the stalk. These hybrids are used mainly for corn silage. The advantages are the stalk is almost as valuable as the ear. The cattle will not leave cobs or stalk pieces in the bunk. The disadvantages are if you end up harvesting for grain, there will be less yield. The standability of these hybrids is not as good. If you know that you will be chopping a certain number of acres for corn silage, I think it would be well worth seeking out some of these hybrids.

Hope this newsletter has given a little better insight into this problem. These things change so slowly that we can't see them until it's too late. When the plant structure changes we have to change with it. The hardest thing is to recognize it. The corn plants I deal with today don't look any different than they did thirty years ago. This is what makes working with soils and crops interesting. All we need to do is wait and man will create another problem to be solved. I hope each and every one of you is having a great harvest season.