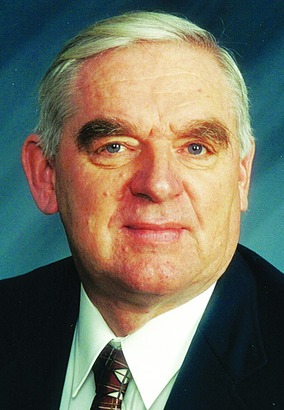 A sign on the door of International Ag Labs states it will be closed today in order to honor the company's founding father, Dr. Daniel Skow.

Many Fairmont residents remember him as the veterinarian who at one time covered the whole county. Others knew him as the founder of Skow Enterprises, now known as International Ag Labs.

"He was my vet when I was a dairy farmer," said Wendell Owens, Skow's partner in International Ag Labs. "The soil thing started as a hobby, then it became more than a hobby ... One day, he said, 'If you think about changing vocations, if we can make a go of this, I'll cut you in. In 1991, I bought in instead of just being cut in. We were full partners and, about five years ago, we brought in a junior partner, John Frank."

During Skow's time as a veterinarian, he worked in Welcome, affiliated with Fairmont Vet Clinic.

"I could call him if I had a sick cow on the weekend, because he covered the whole county," Owens said.

It was in 1976 that Skow began the business that would become International Ag Labs.

"Everything we do here comes back to Carey Reams," Owens said. "His principles are still carried out to this day. It's progressed from 1976, but it started with a week-long conference that got Dr. Skow interested. He went to this conference by Reams to learn about nutrition for animals, and he came out believing that we needed to fix the soil first."

International Ag Labs gets soil samples from around the world because it is the only one that runs a Morgan soil test.

"It's still the best soil sample test because it shows what in the soil is available to the plant, not just what's there," Owens said. "It's not a mining report."

While the firm has a focus on "biological farming," described as a hybrid between organic and traditional farming with chemicals, the soil samples International Ag Labs tests are from every type of farm.

The business expanded from one person to 10 people over the years.

"I did soil testing, bookkeeping, typing, whatever needed to be done," Owens said of partnering with Skow. "His first passion was being a veterinarian."

That passion showed through the many lifetime achievement awards Skow received for livestock production and agronomy. He also was honored by the Friends of 4-H, Acres USA, Martin County Pork Producers and the Minnesota State Poultry Association.

Skow retired from the vet clinic in 2011, but stayed involved with International Ag Labs as long as he could.

"He was involved until the end," Owens said. "He came in here in his wheelchair. This was his baby and he enjoyed it."

Other organizations Skow enjoyed and helped were 4-H and FFA.

"Our company supports 4-H by contributing to the 4-H auctions," Owens said. "I know Dr. Skow made contributions of his own there. We also would make sure to sponsor the Pork Masters golf outing, and a hole at the Youth For Christ golf [event]."

One of the things that will be missed the most at International Ag Labs is Skow's great intelligence and speaking ability.

"He was a good speaker, and that was probably his biggest influence at International Ag Labs," Owens said. "He could get up and speak well, and that will be missed. I won't pretend to be as good a speaker as he was."

Owens is grateful for what Skow has left behind.

"We have a very good, dedicated bunch of employees here now," Owens said. "Dan and I got the credit for what our employees do ... Without them, we wouldn't have anything."

Funeral services for Skow are 1:30 p.m. today at St. Paul's Lutheran Church in Fairmont. Visitation will be one hour prior to time of services at the church.