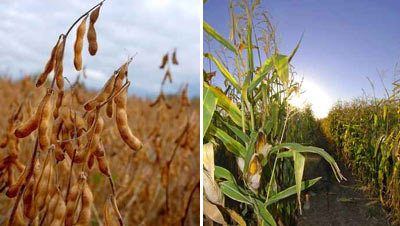 A new client came to my office recently bringing two soil samples from two different fields. Each field consisted of 65 acres and has been in corn soybean rotation for ten plus years. The fields have been ridge-tilled since 1980.

Soil samples on these fields have been tested every year for over 20 years. The test results come back nearly the same each year with fertilizer recommendations also the same for each field. This had the owner a little concerned.

Every time the soils have been tested he has told the fertilizer people that field #1 always has 30-40 bushels less corn than field #2, yet both fields get the same fertilizer recommendations.

When he asked me to run a test I quizzed him about drainage conditions. He feels the fields are equal. The slope and soil types are identical. He also said this problem has existed for 30 years and no one has been able to tell him why.

After testing the soils in my soils lab, I found the same results most other labs had found. The difference in analysis between the two fields was very little.

I have run into more and more farmers who have problems similar to this, and the answer is not easy to find. In most cases however, something has affected the micro flora of the soil.

In the two fields we have been reviewing, the calcium levels are low. I would like to see the reading above 2000 pounds per acre for row crops and small grains. When calcium readings get down as low as field #1 many things can happen.

It would be helpful to know what the calcium and pH readings were in mid August. Readings vary during a growing season and at this time the crop is pulling the greatest amount of nutrients to fill the ear. If the soil system is not in a position to keep adequate calcium available the pH as well as the calcium will drop. If the soil pH dropped below 5 during this time it is possible that mineral tie- ups were responsible for a reduced corn yield.

Another possibility is reduced bacteria activity. Bacteria works on soil minerals making them readily available to plant rootlets. The mineral needed by soil microbes more than any other is calcium. If this mineral becomes limited during the peak of the growing season both the crop and soil microbes suffer.

Boron became a factor in this case because there is a relationship between calcium and boron availability. It would be my opinion that calcium is the problem in this case due to the area this problem is in and the type of soil.

The soil samples brought to me appeared to be low in organic matter and had very poor structure. Crop residue decay was very poor based on visual observation. When extracting solution was added, soil peculation was very poor. This little test tells us a lot. When calcium is available in a soil the extracting solution generally peculates right through, unless excessive salts are present. If salts were present the Ergs reading, would have been very high (over 1000 plus).

Build up of herbicide

It is also possible that a build up of herbicide, which affects a soils electromagnetic field, would affect crop growth and yield. The herbicide factor is a very hot potato and a very hard one to prove. But never the less it is very real. If herbicide residue is a problem, a liquid humate at two quarts per acres does wonders in neutralizing.

Working the ground while wet and cold

Sometimes a problem like this may be nothing more than working the ground when it's wet and cold. I sometimes think this does more harm than we think. When working a soil that is low in calcium and organic matter, compaction can be quite severe and upset the microflora for many years.

I am sure there could be many other causes as to why field #1 has poorer yields than field #2. After discussing the various problems with the owner I outlined a program for each field to try.

For field #1 the program included a number of products to try to correct bacteria and calcium. I would first apply one gallon of residue treat for each five acres and one gallon of liquid calcium as soon as possible in 20 gallons of water.

Residue treat is a product put out by IAT Products of St. Joseph, Missouri. I have found this product to be very good and it will correct any possible herbicide problem. It would be best to lightly work this mix in the top 1-2 inches of soil.

I am sure if this plan was carried out correctly and water was not a serious problem, a very successful crop should be raised. The yield may not be improved the first year but by the third year things should be humming beautifully.

For field #2 I outlined a different program which should work quite well.

I would first apply 20 gallons of 28% liquid nitrogen, three gallons of thiosol, 15cc B12, three gallons of molasses and four gallons of liquid calcium. I would then add water up to 50 gallons with water and spray on each acre. This spray should be lightly worked into the top 1-2 inches of soil.

I believe both of those plans should help increase soil organic matter; improve crop residue decay; and greatly improve tilth and soil structure.

This product, as taught in my seminars, is what Dr. Reams defined as a double anionic product. That means both the nitrogen and potash carry a negative electrical charge. This product is useful for growing crops like spinach, lettuce, cabbage, grass. It is also useful for vegetables, fruits and small grains after the crop has flowered and the seed has set.

For example, it makes an excellent fertilizer for potatoes when they reach the large marble stage. To increase the size and growth of the potatoes apply 300-400 pounds per acre. The same is true for melons, cucumbers and pumpkins. It would also work well for tomatoes after small tomatoes have set.

I recently visited with a person who was blending Chilean nitrate of potash with potassium sulfate in dry blends. He felt the results were much better than using either product by itself.

This product is often used in organic programs because it is an all natural product consisting of bird manure. Like all products there are imitations which you need to watch for. Some companies mix sodium nitrate and potassium chloride, telling you it is the same as Chilean nitrate of potash. It is not so.

I hope each of you have a nice Christmas season and truly remember the meaning and purpose of Jesus.