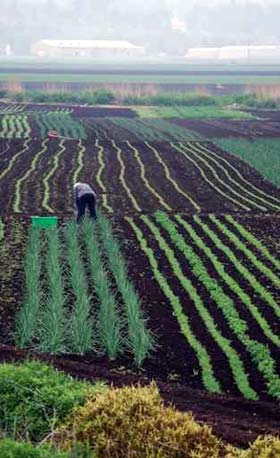 Taking a look at humus

Humus is an aspect of soil fertility that is often overlooked. I think we need to look at this aspect of soil much more closely and learn how to maintain and increase humus in our soils.

According to text books, humus is the reservoir in the soil which stores plant food. Humus in the soil is that portion of plant and animal residues left after decomposition. It is usually dark in color, thus giving soil the dark brown to black color.

Much has been written about soil nitrogen, phosphorus, potassium and calcium, but very little about humus. Yet humus probably has more to do with the economics of crop production than any other soil parameter.

Humus has a very direct effect on the availability of plant nutrients to the rootlets of plants. The lower the humus content of a soil, the more difficult it is for plants to find sufficient readily available nutrients for healthy crop growth. The more humus present in a soil, the more stable the soil's root zone environment. This normally leads to better yields at less cost per unit produced.

Humus is not a definite substance and is in a continual state of flux, disappearing by slow decomposition and being constantly renewed by incorporation of properly decomposed organic matter. With a balance between these processes, humus, though not stable, remains relatively uniform in nature and amount in a given soil.

Humus constitutes a reservoir of stabilizing material which imparts beneficial physical, chemical and biological properties to soil. Fertile soils are rich in humus. Humus improves the texture of soils - it extends a binding effect on sandy soils and loosens the harder clayed soils, thus increasing their porosity and permeability. Humus increases the moisture holding capacity and improves the granular structure by cementing mineral particles into stable crumbs. The humus effects of crumbing of a soil helps the soil resist the pulverizing and eroding action of wind, water and cultivation.

Humus is a storehouse of elements important to plants and functions as a regulator of soil processes by gradually liberating nutrients that would otherwise leach away. A soil rich in humus provides optimum conditions for the development of beneficial microorganisms and constitutes the best medium for growth of plants.

Humus formation depends upon an adequate supply of raw organic residues as well as suitable conditions for their decomposition. The composition of humus varies with the type of vegetation, the degree of decomposition of residues, soil and climatic factors. Temperature, aeration and moisture have a lot to do with proper humus formation. Under optimum conditions, bacteria, actinomycetes and fungi engage in the rapid breakdown of primary organic matter. With excessive moisture and poor aeration, the aerobic microorganisms are relatively suppressed and decomposition is only partial. Feat is an example of humus formed under excessive moisture conditions.

When crop residues, green manures, farm yard manures, composts and organic fertilizers are incorporated in soil, microorganisms begin to decompose it. This may not be the case in all soils today because of a build up of chemicals, salts and toxins. Compacted soils may also be slow to start proper decomposition of organic residues. Under proper conditions some of the ingredients are more readily attacked by microorganisms, while others are very resistant. Sugars are generally the first constituents of organic matter to be worked upon by soil microorganisms. This is a very important factor in the process of humification. The sugars in vegetation are the principle source of energy to stimulate soil bacteria so that the process of decomposition can get off to a good start. One of the problems we have today is that crop residue is very low in sugars so that there is not sufficient energy for the soil microorganisms to rapidly break down crop residue. This can be verified with a refractometer.

I have a friend who grows barley using the ideas Dr. Reams taught us. He has been able to greatly increase the sugars in the barley straw so that when the straw comes in contact with the soil there is nearly complete decomposition within one to two weeks. His neighbor's straw is just like it was six months later. In many areas of the country the straw has to be burned off in order to get rid of it for the next crop.

The use of anhydrous and potassium chloride in many areas of the country produces crops with lowered sugar contents plus reduces bacteria in the soil, resulting in poor, or no, decomposition of crop residue. The result of poor, or no, decomposition is a soil lowered in humus content. The soil is also subject to compaction, poor water holding capacity and a wide carbon to nitrogen ratio. The wide carbon to nitrogen ratio thus required much more added nitrogen to produce a crop. This would not be necessary if the sugars were high enough in the crop residues so that bacteria would have enough energy to start proper decomposition.

One of the most important aspects of starting a proper decomposition cycle is air. The next is moisture and third is sufficient energy in the form of sugars to feed the bacteria. Once you have established these three things you then need a readily available supply of calcium and some phosphorus.

Let's first look at soil aeration. There are several ways to aerate soil. The most common way talked about is mechanical tillage. There are a number of implements available in the market place to work the soil in such a way as to improve aeration. V-riping, spading machines and roto tilling are a few of the ways that man has developed to try to break up soils to improve air and moisture movement. The problem with mechanical aeration is that it's often not a lasting solution.

I personally think that before you start any kind of soil restoration program it's important for you to first understand how the soil got in the condition that it's in. Mechanical manipulation may be helpful to get a proper decomposition process started, but there is a lot more to solving the, problem than buying a new piece of tillage equipment. Your problems won't all be solved just by solving the compaction problem. It seems that the system always has a quick-fix answer or solution only to dream up a new one once they find the last one didn't work. It's interesting to note that all these quick solutions require more capital input in some form at your expense. 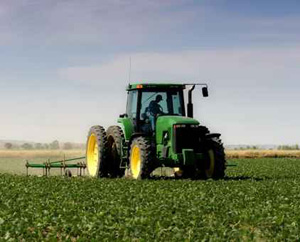 I personally like to approach the problem by getting a good history of past tillage and fertility practices. I would like to know kinds and amounts of fertilizers used, kind and types of tillage equipment available, any past or present drainage problems, kinds of herbicides and insecticides used on the ground and what types of crops and how the harvest was for the past five years. I would also want to know if any animal manures have been applied and in what form (liquid or solid) as well as how often the ground was worked when very wet to get the crops seeded.

I am sure there is more information would need but this would be a good start. Once I had all the above data I would like a good soil test run to give me some idea of what may be available. Finally I would want to know something about past yields and what crops seem to grow best. The final thing I would need to know is how much money you have available to spend.

Once you have all this data available you can then map out a plan to develop a good sound cropping program. I always warn my people that there is no quick-fix procedure, only a well thought out plan and time. I have recently run into a few quick-fix schemes that will solve a problem. I personally don't believe things like that exist.

I usually like to work with the equipment a farmer has available and try to spend his dollars wisely to get the greatest maximum return.

The first rule I like to stress is to get the crop residue in contact with the soil in the aerobic zone. The method used can vary greatly depending on what equipment is available. Next I like to remove those practices used in the past that cause a net reduction in humus formation. I feel three things contribute to reduction of humus formation. One is working the soil when too wet. The second is using too much of the wrong kind of fertilizer at one time. The third is working with land subject to flooding or overflow.

I'm sure most people know it's wiser not to work ground when it's wet, yet many do. I know it seems as if you have to at times, but there are also many times when you definitely don't have to work the ground. 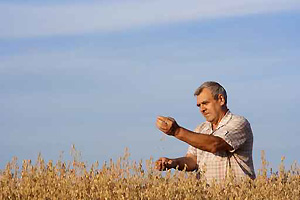 I have found when reviewing fertilizer programs that in many cases there is a history of the use of anhydrous ammonia and potassium chloride. Many times I find both have been used and other times one or the other. I feel that excessive use of either one of these products greatly reduces good soil structure on moist soils. I would encourage switching to alternate sources of nitrogen and potassium in my recommendations. also think we use excess amounts of dry urea and diammonium phosphate (18-46-0). They are poor choices and have a negative effect to good soil structure.

The question now becomes what do we do? I really believe in some cases that to seed a grass crop to improve soil fertility would be the best and quickest solution in the long run. The choice you would make would depend on local weather and soil conditions. I find in my area oats or red clover can have some very beneficial effects on soil fertility. The best solution is to seed both. Use oats as a cover crop for the red clover and work the red clover back into the ground later in the season. If this choice doesn't fly, then I go to a program that I have suggested many times in the past and seems to work quite well.

I start with a general spray formula of liquid 28% nitrogen, liquid molasses and liquid ammonium thio sulfate. The amounts and ratios will depend on the type of crop to be grown. To this I will add things like calcium nitrate if there is a need for calcium and potassium nitrate if potassium is needed. If I need enzymes, I will add liquid fish, sea weed and nitromax or other similar products. The above products would be sprayed over each acre and may or may not be lightly incorporated, depending upon soil moisture conditions. This program seems to start good soil organic matter decomposition and returns the soil to a better state of fertility.

I recently visited a farmer who used this program last year and was very satisfied with the yields and soil structure. They recently had 50 - 60 mile per hour winds in that area and the fields where the program was applied last spring did not blow. Another observation he made was that the fields were much easier to work than those fields that had not had the program.