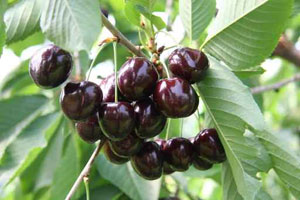 I recently received some sweet cherries from Doyle Cleveland of Bloomingdale, Michigan. The cherries were fantastic. They were very sweet, plump and firm.

The brix reading on the black sweet cherries was 21 brix, while the white sweet cherries were 23 brix. This is considerably better than the chart Dr. Reams gave to me which has excellent cherries at 16 brix.

I called Mr. Cleveland to check with him on how he achieved such excellent quality. His soil test on the cherry ground in the fall of 1987 showed no nitrogens and 60 pounds of phosphate, 90 pounds of potassium and 403 pounds calcium, with a-soil pH of 6.85.

Helpful hints to use on your farm

Last fall he applied 150 pounds sol-po-mag per acre, plus 350 pounds soft rock phosphate. Although he was unable to apply 2000 pounds of high cal lime due to rainy weather, he did get 100 pounds of calcium nitrate broadcast per acre.

In the spring at bud stage he sprayed his trees with copper sulfate and hydrated lime for brown rot, a fungus that affects cherries. He mixed three pounds of copper sulfate, 53 percent copper with two pounds of hydrated lime, in 100 gallons of water. He then sprayed 40 gallons of this mixture per acre with a Jim Bean sprayer. To this mixture he also added one quart of liquid calcium from a local supplier.

During the spring growing season to picking time, he sprayed the following mixture four times. He takes a high quality 9-18-9 and puts 1 - 2 gallons in 500 gallons of water, plus a quart of liquid calcium per 100 gallons and seven ounces of Basic H. He sprays 40 gallons of this mixture to each acre.

Every other week during the growing season he sprays the trees with liquid fish and sea weed. The formula is as follows: four ounces of powder sea weed (MaxiCrop) and two quarts of liquid fish per acre. The sea weed powder and liquid fish are combined in 40 gallons of water and sprayed on each acre. He says that it is very important to mix sea weed in the water a day or two before spraying in order to avoid problems with plugging screens, etc. The spray water is stored in a 2200 gallon tank and treated with eight ounces of 3% hydrogen peroxide before he puts it in the sprayer.

I visited with Doyle over the phone for quite some time and he thinks that foliar spray with liquid calcium, fish and sea weed really makes a difference in product quality. He does not understand why more people don't foliar spray. No chemical sprays are used on his farm.

Last year he had trees producing 35 lugs per tree and each lug weight was 20 pounds. This year has been very dry, with a late frost destroying some blossoms, so he is only getting 17 - 18 lugs per tree.

I would highly recommend trying some of these cherries if you are traveling through Michigan in late June or early July. I am eating some of the cherries as I write this newsletter, and believe me, they are good, especially the white ones.

One other thing that I learned from speaking with Mr. Cleveland is that cherry tree farming is a lot of work, especially if you are going to get everything done like this guy. It has been my experience that few people have the dedication to spray as frequently as he does in addition to all his other work.

I hope this provides you with some helpful hints to use on your farm. 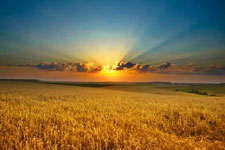 Triticale - A Cross Between Rye & Wheat

Next I would like to talk about a triticale field I recently visited in Nebraska. It was absolutely beautiful. I have always enjoyed watching golden amber small grain waving in the wind near sunset. I do not think that a picture can capture the complete beauty of a scene such as this.

Triticale is a cross between rye and wheat. It makes excellent chicken and hog feed if you get the right varieties. The right varieties mean those with the right amino acid ratios. Triticale really wipes out weed problems because of its fast growth and extensive root system.

This formula was mixed in 25 gallons of water and sprayed on each acre, then worked into the ground lightly. The spring foliar feeding program was 12 ounces of nitro max per acre. The field was split down the middle, with 1/2 getting the nitro max and the other 1/2 getting nothing. This was done to see if nitro max would work on this farm. The soil tests definitely show a difference and hopefully the yield will too.

One of the most outstanding observations I have seen with nitro max is the constant increase in nitrogen readings verses no nitro max. There are a few exceptions to this. One exception is there must be calcium available and the pH at least least 6.0 but preferably higher. Often the pH will move into the 6.8 - 7.0 range when applied, but not always.

The nitrogen rises because of the soil micro-life kicking in, thus producing nitrogen in the soil from the air. If the soil is extremely compacted then it is wise to add 2 - 4 ounces of soil conditioner per acre, but no more. The soil conditioner is very helpful in loosening up the soil, but requires at least 2 - 3 inches of rain for it to be effective.

Several other patterns are common when the nitro max fits into a soil program. One is the phosphorus to potassium ratio narrows. Normally the phosphorus increases and the potassium decreases with an increase in calcium. However, this did not completely happen in this case. It may be due to the magnesium level coming down first and later on the calcium should start to rise along with the phosphate. I did not have a humus test to run to compare the difference, but the humus usually rises 1/4. to 1/2 percent per year for 3 - 4 years. We hand harvested some heads while checking the field and I weighed them on my gram scale. The nitro max kernels weighed 60 milligrams a kernel, while the non nitro max kernels weighed 32.5 milligrams a kernel.

I hope to have samples along with me when I am in Pennsylvania speaking at the Nitro Max Conference in Dillsberg, July 21, 22 & 23. I will also have the final results at my conference on August 1 & 2. I hope to see many of you at one or both of these conferences.