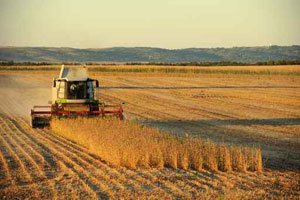 Nitrogen is probably the most important plant nutrient used by commercial farming operations today. The cost of producing nitrogen to society and your farming operation is very high. It takes approximately 33,000 BTU's of natural gas to produce a ton of commercial nitrogen. The result is an incredible waste of natural resources that could be used to heat the homes of future generations.

It was reported by practical farmers from Iowa that many corn plots across the state yielded more corn with 30-40 pounds of added nitrogen than fields having 150 pounds. I wonder how often this has happened on your farm without you knowing it. This could be a savings of $7-18 per acre on many farms.

The savings to society must also be considered. With excess nitrogen polluting our ground water no one really knows what the long term impact will be to our environment. It is known that in certain areas of our country the nitrate levels in water is so high that babies are being born with brain damage. Who knows what the other consequences might be. I emphasize these points because I truly believe there is another way.

There are other techniques for growing corn with lower nitrogen inputs while maintaining equivalent yields already known. I am glad to see that my alma mater is developing testing guidelines for soil nitrogen needs. Very soon they hope to have kits available to extension offices as well as on farm test kits. The kits will be used to check soil nitrogen to help determine how much is needed.

I know of research that shows adding more than 30-50 pounds of nitrogen at one time greatly reduces the soils natural nitrogen building cycle. In other words, the soils natural algae and aerobic bacteria go dormant making it necessary to add more nitrogen to get a good crop.

Making the transition from high input nitrogen to low input nitrogen can be a real challenge. You will need to study diligently and may need to hire a consultant who understands the principles to make the switch.

You first need to understand that over each acre of land you farm there is approximately 45 tons of nitrogen. This is more than enough to raise most any crop I know about. The problem is the nitrogen in the air is not directly available to plants in that form. Air contains 78% nitrogen. A slow, 24 hour drizzle will add about four pounds of nitrogen per acre while a good old electrical storm will add much more. A good snow covering and cold air during the winter will also add nitrogen to your soil.

These sources of nitrogen can be very valuable, but many are not getting the benefit because of other soil management practices. Many of you have hard pan and soil compaction which makes it difficult for the soil to accept these free sources of nitrogen. The hard pan prevents proper water movement in the soil, while compaction allows much of the rainfall to run off rather than soak in. This is only the beginning of your problem. 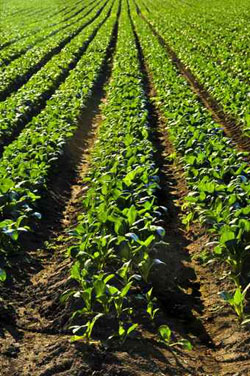 Too much potassium chloride

Next, too much potassium chloride is put on which greatly reduces the algae and aerobic bacteria in soil. These are the very creatures you need in your soil to convert crop residue into humus and future plant food. Without these soil microbes much of the crop residue is oxidized instead of converting to organic matter. This results in wind and water erosion which in turn leads to no till farming where you leave all the crop residue on top. This is the final insult to the soil eco system because now you starve the soil bacteria for energy. Active soil bacteria is what keeps the soil moist and prevents the soil from blowing.

Crop residues left on top of the soil

Leaving the crop residue on top does stop wind and water erosion in the short run. It will increase input costs however in the form of fertilizers, herbicides and insecticides; the very thing you are trying to get away from. Crop residues left on top of the soil break down by oxidation which converts the crop residue to salts, letting the carbons escape into the air. This is one of the reasons root rot and nematodes are becoming more of a problem.

If you deprive the soil microbial system of its needs, you become very dependent on commercial inputs. Fungi are needed in the soil to break down stalk residues as well as aerobic bacteria. These are very important because soil micro-organisms are what convert insoluble soil minerals into soluble to be utilized by plants. This is a factor that cannot be measured by current soil testing techniques because strong acids and alkalies are used in soil extraction yet none of the soil extractents exist in normal soils.

Algae are single celled plants which can take carbon dioxide from the air and convert it into simple sugars by the process of photosynthesis. The effectiveness of algae doing this can be greatly reduced with the use of excessive amounts of acid based fertilizers and herbicides. Algae are needed to produce the sugars which are the energy source for the soil bacteria. The bacteria and algae then work together to properly break down crop residue to organic matter. This is natures way of storing plant food from one season to the next without leaching. It also helps prevent wind and water erosion.

Bacteria are single celled animals and have all the basic requirements of another animal. Even though they are small, they still need oxygen, water, energy and calcium. Bacteria naturally convert insoluble calcium into soluble calcium making it readily available to the crop you plan to raise. This is one very important fact that current soil tests do not take into account. I would like to emphasize this point because many states are forcing labs to standardize testing procedures. If they succeed in forcing the current recommended procedures they will have done a great disservice to the biological farming movement.

The proliferation of bacteria, algae and earth worms causes the soil to become granular and establish structure. The result is reduced wind and water erosion plus much better water penetration. If this concept could be instituted across America, flooding along rivers may be greatly reduced.

It is important to understand these things to better understand a low input nitrogen management program. It is also important to know how to manage bacteria like any other farm animal to get maximum return. It is the bacteria in the soil that converts the nitrogen in the air into ammonial and nitrate nitrogen that can be utilized by crops. Bacteria also produce amino acids which are very sticky and is one of the many ways that the soils nitrogen can be built up and prevented from leaching.

Establishing a nitrogen cycle in your soil

Learning everything you can about managing your field livestock will show you how little commercial nitrogen you will need to grow a successful crop. First you need to know how to properly incorporate crop residue and manures into the aerobic zone of the soil. For some of you the aerobic zone is 1-2" deep, for others it is 4-5" deep, and for others still, it is 6-8" deep. It is a serious mistake to plow your crop residue 8-10" under if there is no air because the bacteria will not work. I have seen many fields where they plowed that deep and found whole corn stalks several years later. This tells me the soil is nearly dead. The other extreme is leaving the crop residue on top where bacteria cannot get at it. Working the crop residue into the aerobic zone is important in establishing a nitrogen cycle in your soil. Once this is established you can consider nitrogen reduction and reducing inputs.

The timing of this procedure is difficult. The nitrogen cycle will not establish using high nitrogen inputs so first we need to learn about split nitrogen applications. Split nitrogen applications are vital to a transition program so you do not sacrifice crop yield. A soil and leaf analysis during the growing season is important so you do not run out of nitrogen. Many times we find that it is some other element that is limiting crop growth.

For many of you it has been easier to add more nitrogen. This approach works but there is a price to pay. It results in poor crop quality, grain that does not store well, and a grain that. will mold much easier in the bin. I have seen plenty of this. It can ruin a livestock operation, yet we continue the practice.

Adding water and carbons to nitrogen before applying to the soil

In addition to considering split application of nitrogen, we need to learn how to add water and carbons to our nitrogen before we apply them to the soil. Understanding how to do this can make a low amount last longer and cut down on leaching into the aquifer.

Commercially, 28% liquid nitrogen is a readily available source of nitrogen. I encourage you to never apply it straight. First add water. Then add things like molasses, seaweed, liquid fish, corn sugar, nitromax, soil treat, growzyme, nitron, soil aid and liquid humates. All of these products along with water and liquid nitrogen will benefit your soil if properly planned. Knowing how much nitrogen to put with each of these products is important in creating an effective soil building program. The amounts vary depending on soil type, soil compaction, soil aeration, soil temperature and the previous crop grown. All of these points need to be considered before determining the rate of each. The water dilution is also a variable depending on the type of sprayer used to apply the mix.

It has been shown that adding liquid humates to liquid nitrogen in very sandy soils in Florida will cause the nitrogen to last nearly 65 days longer than if it were applied straight.