Looking At All The Variables

In my area of the country corn and soybean harvest is progressing very rapidly. Yields are all over the board with corn running anywhere from 23 to 200 bushels per acre having essentially rainfall.

I know of four different fields of corn nearby that were alfalfa last year and corn did not even make 30 bushel. Yet corn on bean ground in the same area has had highs of 160 to 200 bushels per acre. Normally the alfalfa sod ground would have the better yields. This year however, sub soil moisture was greatly reduced because of the alfalfa roots.

An example of this is a local dairy firmer who for several years has been getting 170 bushels on his alfalfa sod. This year it yielded only 23 bushels, while his other ground yielded 100 to 120 bushels.

It is difficult to plan for 1989 when you look at all the variables we have seen this year. For instance, we had 10-12 inches of wet snow the last day of April. Corn that was planted before the snow averaged 25 bushel more per acre than corn planted after the snow irregardless of tillage practices. This information is based on Pioneer Weight Wagon results. The more the ground was worked after the snow, the lower the yields were. This too is based on weight wagon results.

I have had a number of questions asked about red streaking on corn kernels. The streaking is only on the surface of the kernel and according to University Extension people this condition is harmless. The red streak is caused by a toxin produced by small mites feeding on the ear. The incidence of streaking seems to vary with varieties, with it most prevalent in varieties having loosened husks allowing easier entry of the mites. I do not know of any fields that had more than 2000 pounds of calcium per acre during the growing season having any problems. It also seems that spider mites in soybeans were not as active in higher calcium fields.

A good calcium soil is needed for ammonium sulfate to work against to be effective.

Recently I received a telephone call from a client who had used Ammonium Sulfate on his soybeans. He was very pleased with his results. His preplant soil analysis was as follows : 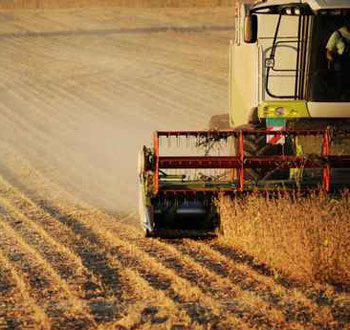 If the pH had been 6.0 and the calcium reading below 1500 pounds, ammonium sulfate would not have been the fertilizer of choice. Often when people get a good response to a particular fertilizer they want to put more on next year.It is very important to have a planned program because some high calcium soils can drop very rapidly if too much ammonium sulfate is applied for several years. Many soils can handle 20 to 30 pounds of sulfate per year for a long time, but not 50 to 60 pounds. Ammonium sulfate contains 26 per cent sulfate so100 pounds per year would not be so bad. 200 pounds per acre for several years however could lead to mineral tie ups unless you started adding lime.

The soils pH lends itself to several other problems which makes it difficult to raise soybeans. Soils with a pH of 8 or more can be short of available iron, manganese, copper and zinc. Iron is needed for plant growth. It helps the plant leaf to hold heat and maintain a proper green color to maximize photosynthesis. Copper is needed to keep the bark from splitting. Manganese is needed to keep pods from aborting. Zinc is important in the overall health of the plant. The addition of ammonium sulfate in this instance would drop the soil pH and stimulate soil micro flora, thus releasing essential trace minerals and improving crop growth. Ammonium sulfate also stabilizes soil temperature if adequate moisture is present, improving crop quality and yield.

In this clients case, the moisture level during most of the growing season was so low that the ammonium sulfate did not get a chance to work at its best on this soil. Anywhere that it was very dry this year, ammonium sulfate was not the nitrogen source of choice.Dryammoniumsulfate surface applied simply did not work in areas with marginal rainfall. The bottom line is understand your soil test before you apply very much ammonium sulfate and pray for adequate rain.

The next field I would like to review with you I have planned programs for two years. The owner of this field has raised two crops each year of snap beans and the total yield each year has been 8 ton per acre.

The field is irrigated and when I first started working with this account the soil was very hard and compacted. In addition, the organic matter is quite low making it difficult to build plant food reserve, and high magnesium levels keep releasing nitrogen. The low organic matter plus magnesium really makes it difficult, with soil compaction adding to the problem - because air must be able to circulate in a soil to have microbial life and nitrogen from nature.

Many times when there are a number of problems to correct in a soil we cannot do everything needed at once because of financial constraints has been very slow. I do not know how far I will get but I feel I am doing my best in a difficult situation. I have succeeded to get a crop for this account the last two years. There has been enough to pay bills with a little left over.

The first hope came this year in July when the soil showed a distinct mellowing when the ground was worked for the second crop of snap beans. The second crop this year yielded 5 ton per acre and the quality was good. Yields like this pay bills but we still need a lot of fine tuning to make it a really profitable crop.

The biggest change in the soil analysis is the switching of the phosphorus and potassium which should help future weed control. The next thing needed is to get the calcium reading back above 2000. I have been using a fair amount of nitromax to get some parameter to come into line, but it has not worked as well as I would have liked, due to soil compaction. I also think the irrigation of this field has slowed progress, but it is necessary in order to get a crop, especially this year.

There is no quick fix

One thing you must remember is there is no quick fix. You can force some quick changes but you will pay for them sooner or later. If you look at the analysis, we are headed in the right direction. The pH is moving into a very acceptable range, the phosphorus is moving in the right direction, and soil texture is improving. These three parameters strongly indicate a much improved soil micro flora.

I would hope now that we will progress a little faster. There still may be some trouble with the soil breaking loose some unexpected nutrients that are currently bound up. Once we get over this potential problem things should improve. If we do not run into any new problems we can start to increase yields plus quality.

Next year we are going to switch this field from snap beans to soybeans. The program we have outlined under the 10-88 soil analysis is the program I would recommend to be put on next spring preplant as a least cost program and continuing as we have been. If cash is available I would like to use one of the six programs outlined earlier in this newsletter. However, the cost would be high and the return for investment would not be very good. I would hope that three to four years down the road this would not be true .

Program 1-2 are designed for fall application.I would want all the products blended together and spread on top of the ground this fall and left for spring. Programs 3·6 are to be mixed and put on with a slurry spreader this fall. I have done this before on other fields with good results.You should notice that by using a slurry spreader you do not need as much product to get the job done due to distribution. I also want to point out that when you add ammonium sulfate you need more lime on a soil like this.

I have put this newsletter together to let you see that there is no easy answer, that it is important to have soil tests and a consultant to work with to make true progress.

I feel the field we have reviewed is on the verge of really shaping up. The calcium has bottomed and started to rise and hopefully the micro flora and improved aeration will really start to make things happen.